Making the MakerSpace Even More Interactive 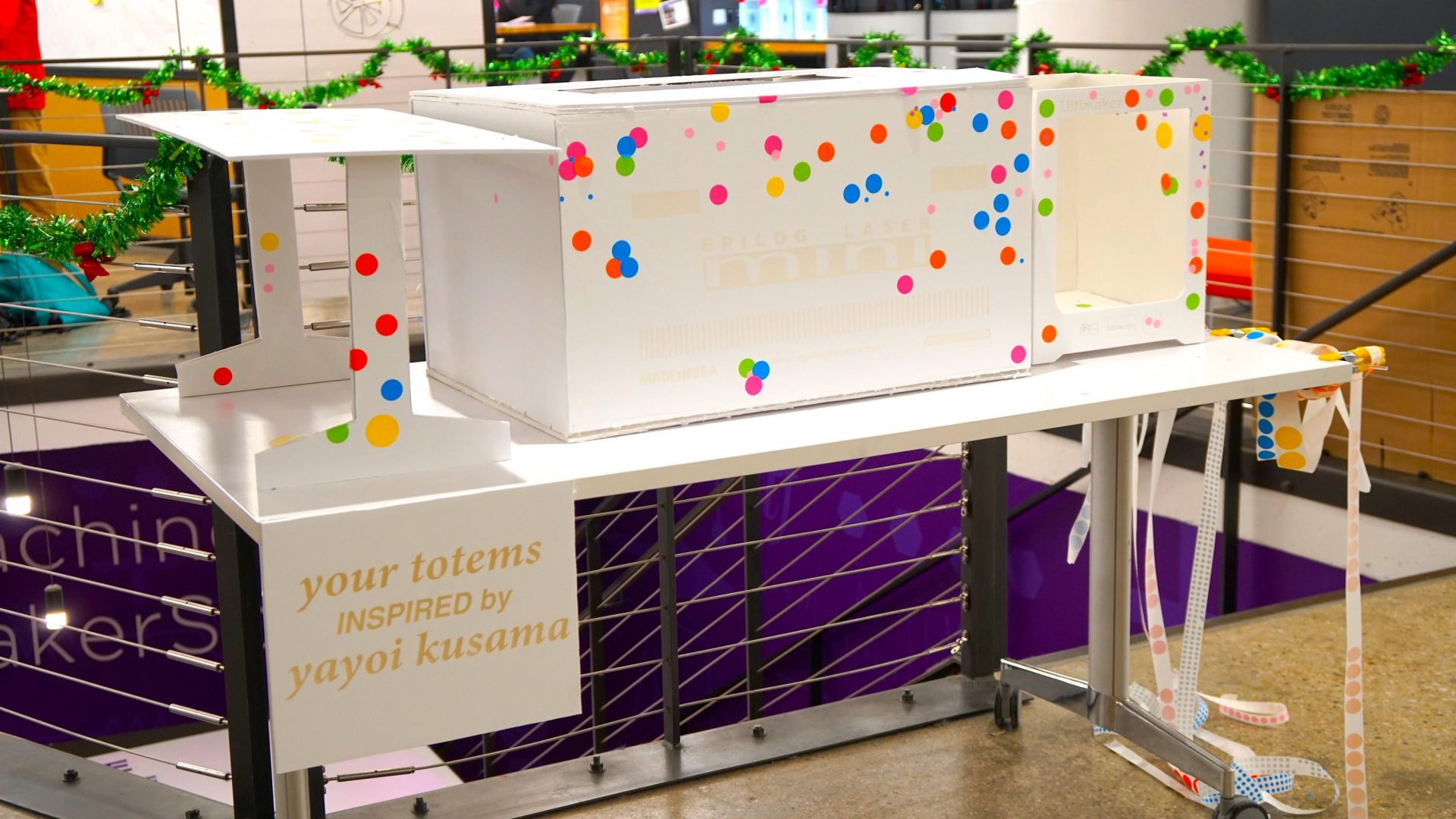 A Trio of Design “Interventions” Engages Students in New Ways.

On any given visit, the word that comes to mind is “bustling,” with students busily 3D-printing various projects, skillfully deploying laser cutters, or even simply working on class assignments or chatting.

While there is a growing body of research on academic makerspaces like the one at Tandon, it has been hard for researchers to gain a meaningful understanding of the ways in which people use and interact within the facilities, expressly because of their dynamic nature. Surveys, interviews, first-hand observation, and data from ID readers or sign-in apps has not painted a full picture, so MakerSpace Founding Director Victoria Bill and Associate Professor of Technology Management and Innovation Anne-Laure Fayard, along with Srishti Kush (a master’s degree student in Integrated Digital Media) and Madeleine Nicholas (a senior in Computer Engineering) came up with a different method.

Building upon research on tangible visualization and inspired by the design created by two researchers in a fabrication lab in Paris, in spring 2018 they developed CAIRN, a tangible, interactive structure to collect and materially visualize data. MakerSpace users were asked to create a representation (a “cairn”) of their visit and interactions by piling colorful acrylic discs on a pegged board to indicate why they had come to the space, what machines (if any) they had used, whether they had worked alone or in a group, and other such factors. (The name CAIRN is derived from a Scottish Gaelic term that refers to a human-made pile of stones, often built as a memorial or landmark.)

“Because of its interactive, playful dimensions, CAIRN is representative of the Maker mindset, which is playful, growth-oriented, and collaborative,” Bill and Fayard explain.

Fayard notes that one main insight from CAIRN was its ability to generate conversations and reflections about the space and making practices. The insights gathered from CAIRN led directly to another creative project: a trio of what she calls “interventions,” meant to prompt visitors to the MakerSpace to think of their work there with fresh eyes. With Jessica Chase, an Integrated Digital Media student, taking the design reins, the three installations proved a popular — and colorful — addition to the space. The aim here was, Fayard explains, “to take some learnings from CAIRN and explore them in a simple and playful way, very much in line with rapid prototyping philosophy.” Each intervention was inspired by previous works by designers and artists that the team decided to reinterpret in the MakerSpace.

For the first, called “Tactile Tubes,” (inspired by Lucy Kimbell’s Physical Bar Charts) students dropped plastic balls into a series of clear tubes to indicate what they had done during their visit, whether it be collaborating, making, learning, or some combination thereof. As the tubes filled, the visual effect called to mind an amusement park ball pit — eye-catching and irresistible. The second intervention, dubbed “You Make Me Feel, ” in reference to Candy Chang’s work,  asked students to consider how inspired they were  by the space and invited them to take photos (featuring themselves or not) of the phrase “Inspired Today.” A final project, “Your Totems,” was inspired by Japanese artist Yayoi Kusama’s Obliteration Room, which invites visitors to use vast numbers of polka dots, or “infinity nets,” as she calls them, to cover the surface of a room. In this instance, Chase constructed pure white facsimiles of MakerSpace equipment and invited users to cover them with colorful round stickers, which on the roll were reminiscent of the candy buttons beloved by generations of children. These facsimiles were conceived to evoke the “totems” of making tools for the MakerSpace community, which was invited to show their attachment to the different machines.

While simple and playful, each intervention aimed to encourage the MakerSpace community to reflect on their practice and engage with the space in a new, more personal and creative way. Fayard and Bill plan to use this project to contribute to scholarly research on design and academic makerspaces, while actively inviting students to become active members of the MakerSpace community and reflect on their practices.