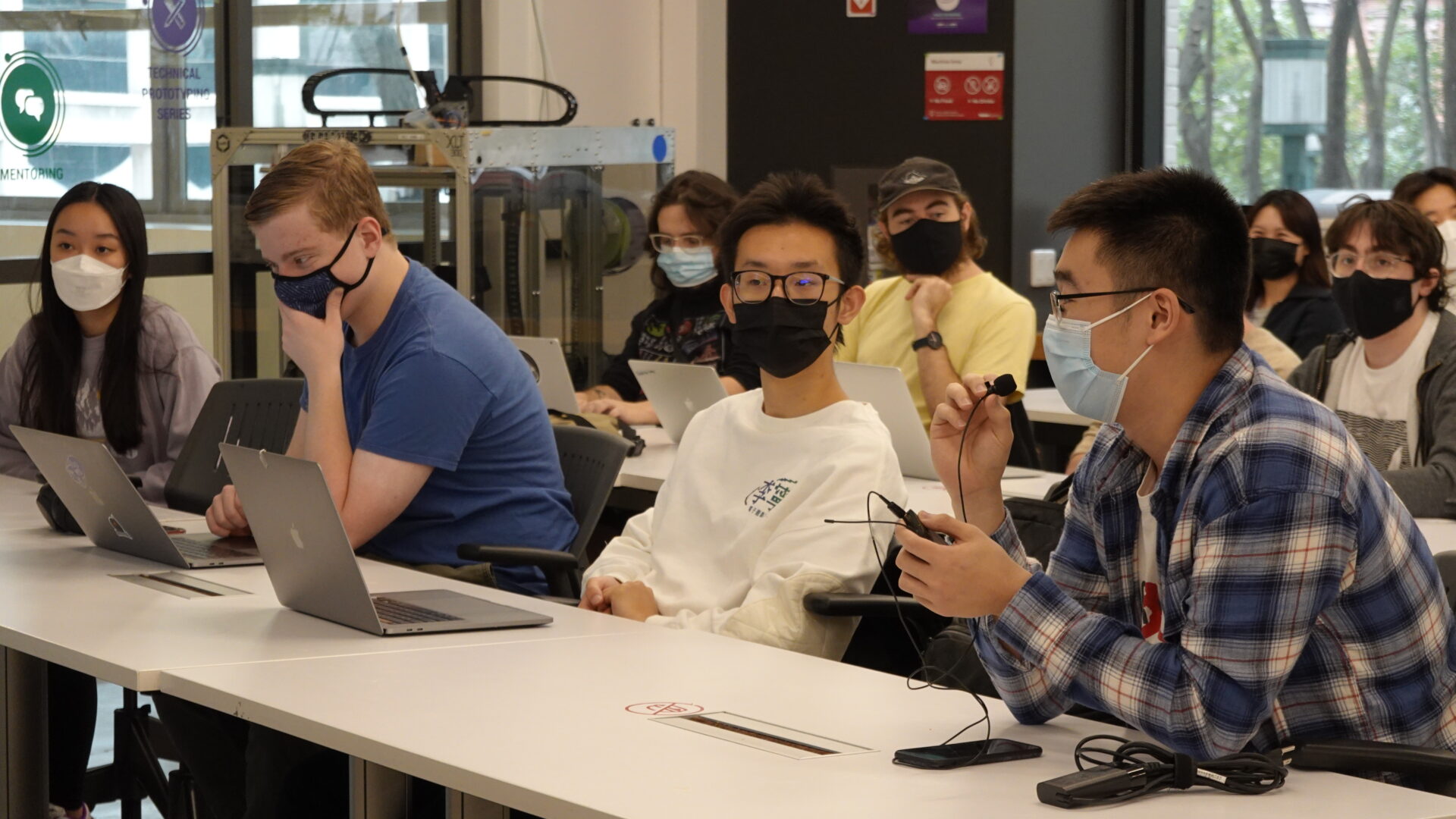 The NYU Prototyping Fund is a collaborative program offered by the Design Lab @ NYU Tandon MakerSpace, the Technology Management and Innovation Department, and New York City Future Manufacturing Collective (NYC-FMC), that awards teams of students up to $500 in the first round of funding and up to $2,000 in the second to be used to build hardware or software prototypes, and connects them with the resources, tools, and mentors they need to bring their ideas to life and move to the next stage of product development, while encouraging multidisciplinary collaboration between students at NYU. This semester, 12 teams were selected to represent 6 NYU schools, totaling to almost $4,000 dollars!

On Wednesday, October 7th, the cohort met in the NYU MakerSpace’s Design Lab to kick off the program. During this session, we discussed various prototyping techniques as well as “why” and “how” to prototype. Participating teams are working on projects ranging from building an autonomous drone that picks up trash, to creating a healthcare-oriented VR game, and developing NYU’s first nanosatellite through NASA’s CubeSat Launch Initiative. While some teams are working on physical prototypes and others digital – the principles of early testing, asking questions, and learning from users apply to all of the projects. We encouraged the teams to use prototypes as a method to fail safely (and cheaply) and ultimately, to begin testing as soon as possible.

Learn more about the cohort below. We are excited to see what these teams build, how they creatively test, and get user feedback while using design thinking techniques!

Communil: Creating proprietary scannable barcode matrices (similar to a QR code) in conjunction with software to act as a bridge between the students of the NYU community. Jonathan Gao & Dimash Shubay

Portable Sound-Proof Booth for Vocal Training: Building a sound-proof booth that allows for effective vocal training while isolating the environment from the loud sound. Qinsong Guo

Mundare: Building an autonomous drone that flies along a predetermined path on a section of beach, using a video camera and machine learning to detect trash that it encounters and picks it up. Daniel Zhang, Ali Fakhry, & Nick Pham

How to Create Jewelry in the MakerSpace

This post was written by Cat Almuete, a sophomore majoring in Computer Science and minoring in Game Engineering, & winner of the October 2021 MakerSpace Mini Grant. For this project, I decided to prototype with creating jewelry using a variety of machines and non traditional mediums. During this prototyping, I created designs for earrings and necklaces. With this personal project, these pieces are now going to be Christmas gifts for the beautiful women in my…
END_OF_DOCUMENT_TOKEN_TO_BE_REPLACED

Growing up Greek-Cypriot, I am constantly hearing stories about the homeland and have visited many times, so I wanted to show my love for the island and create a piece for my grandparents. I first 3D modeled the land of Cyprus on Fusion 360 with a frame. Once my design was completed, I used the ShopBot to mill out the surrounding area of the island. When the area was milled, I filled the gap with…
END_OF_DOCUMENT_TOKEN_TO_BE_REPLACED

Molding Mooncakes in the MakerSpace

This blog post was written by MakerSpace User Jennifer Qian Jennifer Qian is an Art and Data Science student at NYU Gallatin. She used the Form3B printer using dental resin to create mooncake molds. Please keep food safety in mind when creating kitchen tools – here is a great article for reference. Learn more about Jennifer’s process here: What is your Project? My project is “Mooncake Making – connecting the past and present”. This is…
END_OF_DOCUMENT_TOKEN_TO_BE_REPLACED

The NYU Prototyping Fund is a collaborative program offered by the Design Lab @ NYU Tandon MakerSpace, the Technology Management and Innovation Department, and New York City Future Manufacturing Collective (NYC-FMC), that awards teams of students up to $500 in the first round of funding and up to $2,000 in the second to be used to build hardware or software prototypes, and connects them with the resources, tools, and mentors they need to bring their…

Interested in learning about new job opportunities? Attend the VisionVoice, Inc. Access2Tech Virtual Conference! This conference is FREE for students seeking software engineering internships and entry level roles. This year’s conference is will be held August 13th-15th from 10AM – 3PM. The speakers for this year’s conference include: Latoya Westbrooks-Keeling, a Senior UX Researcher at Facebook, Christina Wick, Chief Technology Officer at Flowcode, Allison Ventura, Chelsea Kwong and Sean Ellison-Chen, who are all VisionVoice,Inc. Mentors!…
END_OF_DOCUMENT_TOKEN_TO_BE_REPLACED