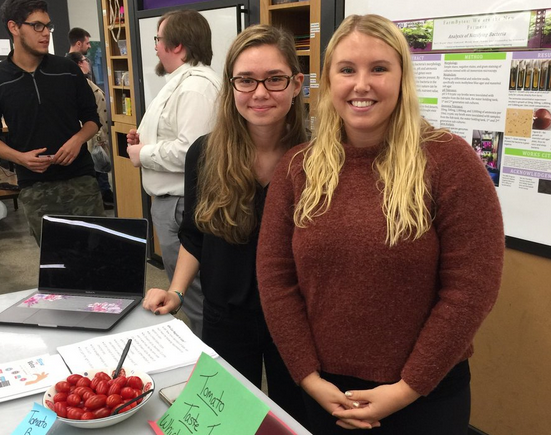 While We Are the New Farmers was launched as a venture (see our previous story), the vertical farm that the team had created stayed in the MakerSpace and became the Urban Lab VIP project. Omar Gowayed, one of the members of the original team, shares with us the story of the Urban Lab. This is a passionate story about food and sustainability, but also about  iteration, experiential learning and community engagement.  We hope you’ll enjoy it as much as we do. And if you see Omar in the MakerSpace, don’t hesitate asking him about the farm: his enthusiasm is contagious! 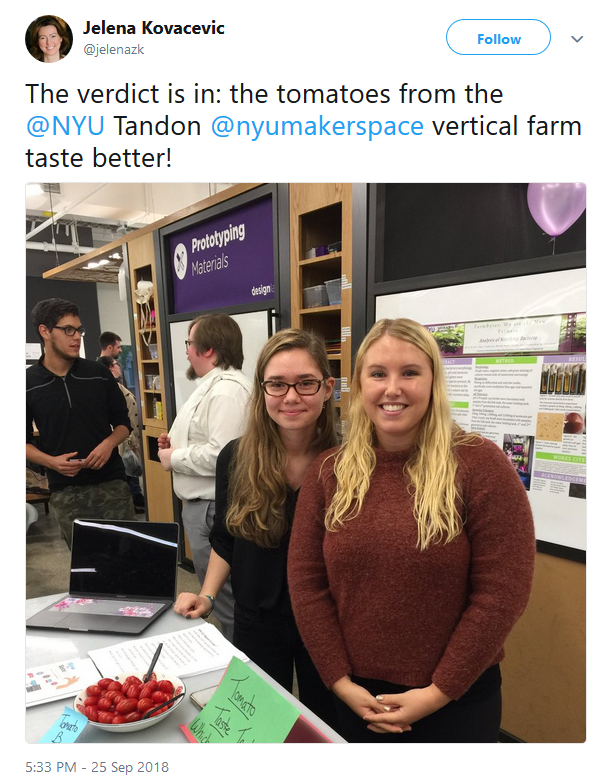 Urban Food Labs started in 2016, when Selim Senocak, Jonas Gunther, and I wanted to go out. However, Jonas had an idea to start a vertical farm with the NYU Prototype Fund. Eventually, through several iterations, we built an aquaponic vertical farm in the Makerspace. While Jonas, joined by two co-founders, created a venture We Are the New Farmers, after graduating in May 2018, I was able to keep the farm and integrated it in a VIP project

Currently, we have two instructors Alexandra Seidenstein and myself and 10 students from various engineering backgrounds growing food in the Maker Garage on Gold Street and the Makerspace at 6 Metrotech!

The goal of this project is to not only teach students how to apply their fields of interest into urban farming in a hands-on aquaponic setting, but to immerse them fully in the concept of community engagement and sustainability. Students in the class are not only invited to apply for funds in order to finance their individual projects, but to visit other farms, register people to vote, volunteer, and attend seminars on sustainability. The goal is to give the students the space and resources to design something to enhance the aquaponic field and our planet. 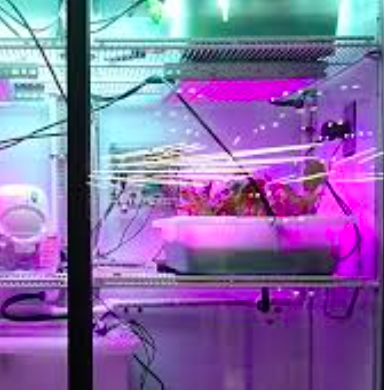 We have developed a platform for students to learn about aquaponic farms, so why not share? When I sat down with Dr. Anne-Laure Fayard (Associate Professor of Management in the Department of Technology Management and Innovation and advisor to the Design Lab @ NYU Tandon MakerSpace), Dianne Anderson (Director of Sustainability), Victoria Bill (Manager of the NYU Tandon MakerSpace), Alexandra Seidenstein (Chemical and Biomolecular Engineering Lecturer), Jonas Gunther (co-founder of We Are the New Farmers, and Jane O’Mahony (Sustainability Administrator) in order to discuss the future of We Are the New Farmers at NYU, the idea of constructing a class for the farm seemed magnificent. 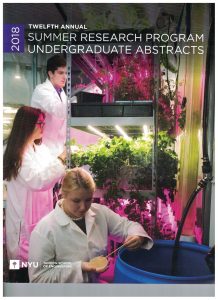 Well… learning the ins and outs of farming is challenging. From completing the enclosure and having shelves filled with delicious greens, to having to stop a fish sickness outbreak: this has been a roller coaster. The steep learning curve has always been a part of this farm and I love it!

The  role of the MakerSpace in particular?

The NYU MakerSpace has been perfect in dealing with all these problems and successes. Not only have they graciously given us the tools and space necessary to grow and experiment as a project. It has given us access to students, faculty, staff, and resources to help us solve these problems as well as people distribute our delicious tomatoes and veggies. We are really excited to solidify our expansion into the Maker Garage and continue to enhance our project as we learn.

As I mentioned earlier, the farm was developed in a stepwise procedure: We went from a phase I, a desktop hydroponic vertical farm with arugula that tastes as flavorful as the arugula in Egypt by mimicking the average temp, humidity, and sunlight of that environment. From that, we went onto phase II, where we put a vertical farm in a fridge to control the temperature. Afterwards, we won the Green Grant for ~$20,000 to build an aquaponic enclosure in the Makerspace with four shelves and forty fish as We Are The New Farmers.

Now, Jonas has started a company named We Are The New Farmers, in which they are selling spirulina, and we have changed our name to Urban Food Labs and became part of a Vertically Integrated Projects class with another ~$20,000 Green Grant.

After this year, I will be able to develop proper metrics to measure student learning in this environment. From that, I can construct a stable class that I can give to a career faculty member (I’ll probably eventually graduate J ). This way an education program in which students have the capacity and funds to be free to experiment and learn about aquaponic farming can continue to exist at NYU.

Programs such as the prototyping fund are critical for student development. Students get to learn about project management and design by getting their hands dirty with it as opposed to in a classroom.  I basically modeled my class based on my experience going through the Prototyping Fund, but within the specific context of an aquaponic space.

Omar Gowayed is a Materials Chemistry PhD candidate specializing in Nonphotochemical Laser Induced Nucleation, an organizer for March for Science NYC, and a happy farmer.