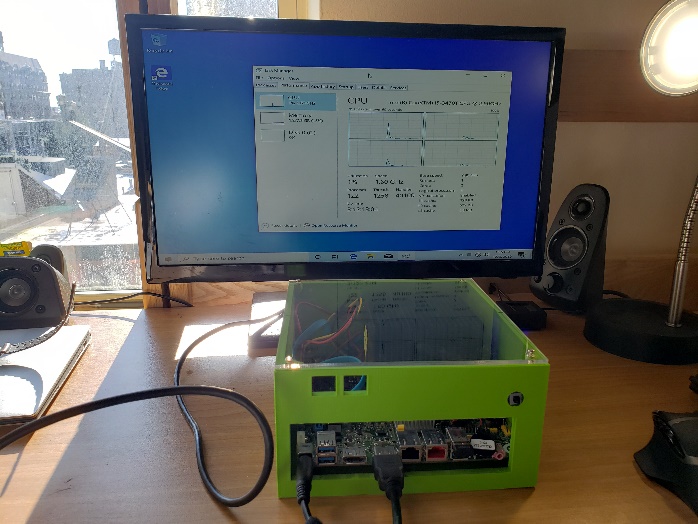 This blog post has been prepared by Somto Ejinkonye, winner of the MakerSpace Mini Grant for the month of October, 2019.
Somto is a junior studying at Tandon.

​The project was inspired by the need to reduce electronic waste in our environment by upcycling old or broken electronics. The motherboard was going to be discarded by a local business, so they agreed to give it away instead. Upon closer inspection, the motherboard seemed to be in working order, except for the audio jack which was broken off from the PCB. I wanted to repurpose the motherboard as a system that could be used as a regular computer.  As is often the case with discarded electronics, multiple components were missing, and I would need to build a case for the motherboard. This would prove to be a challenge because the motherboard had non-standard mounting holes. At first, custom measurements of the motherboard needed to be taken and a 3D model of the case was modified using AutoDesk Fusion. The top of the case was designed in adobe illustrator and laser cut from a piece of acrylic. To keep costs inexpensive the case was 3D printed and assembled with brass standoffs, aluminum screw and brass heat set inserts. The makerspace provided all the materials I needed to construct the prototype. I used the 3d printers, laser cutters handsaws and soldering irons.

The original design of the case did not fit on the Ultimaker 3 bed and could not be printed in one piece. I circumvented this by cutting the case into two pieces printed each piece individually gluing the final product together. However, cutting and gluing the case disrupted all the measurements originally made and the case needed to be reprinted. Fortunately, the ability to print both pieces at the same time meant prototypes took half the time to make.

When the prototype was finally ready to be assembled the acrylic top accidentally cracked while being screwed into place. We were able to retake measurements and reprint another lid.

Given more time, LEDs or indicator lights would have been placed inside the case and a better power button for the case would have been designed. Although $30 was spent prototyping the case the cost of materials used totaled only to $7 and the design can be modified to save other discarded electronics from landfills.