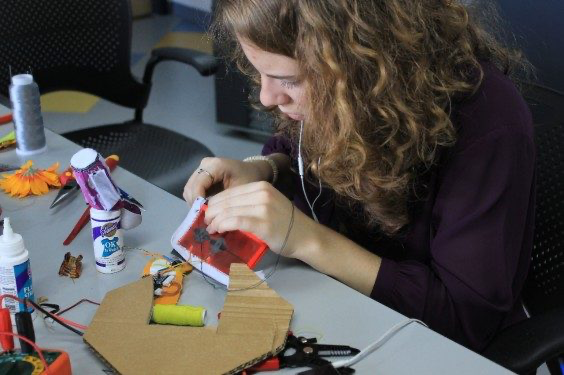 The Design lab at MakerSpace hosted the awardees of the Prototyping Fund to review various methods and tools for prototyping on October 4th. Participants were encouraged to use prototyping as a tool to answer a question at hand. Using this notion, over the span of the semester, participants will treat prototypes as “questions embodied” and translate their vision into something that can be used to collect feedback from users. The teams were advised by the faculty advisor at MakeSpace, Anne-Laure Fayard that, “The prototype doesn’t have to be perfect, you don’t have to prototype the whole thing. You may prototype a small part of it – test, learn, and iterate – instead of creating a huge thing.”

Since 2013, the NYU Prototyping Fund, a collaborative program by the Design lab and NYU Entrepreneurial Institute, has awarded teams of students up to $500 for Phase 1 and $2000 for Phase 2 to build prototypes, test and explore assumptions, and bring their ideas to life. The teams have been announced for the Fall 2019 cohort — 12 teams from across the University. Participants represent 7 NYU schools, with the highest numbers from Tandon, CAS, and Tisch. You can read more about The participating teams by clicking here!

The final showcase will be held at MakerSpace on Thursday, December 5 (3- 5 pm). We are excited to see what the Teams bring to the table!