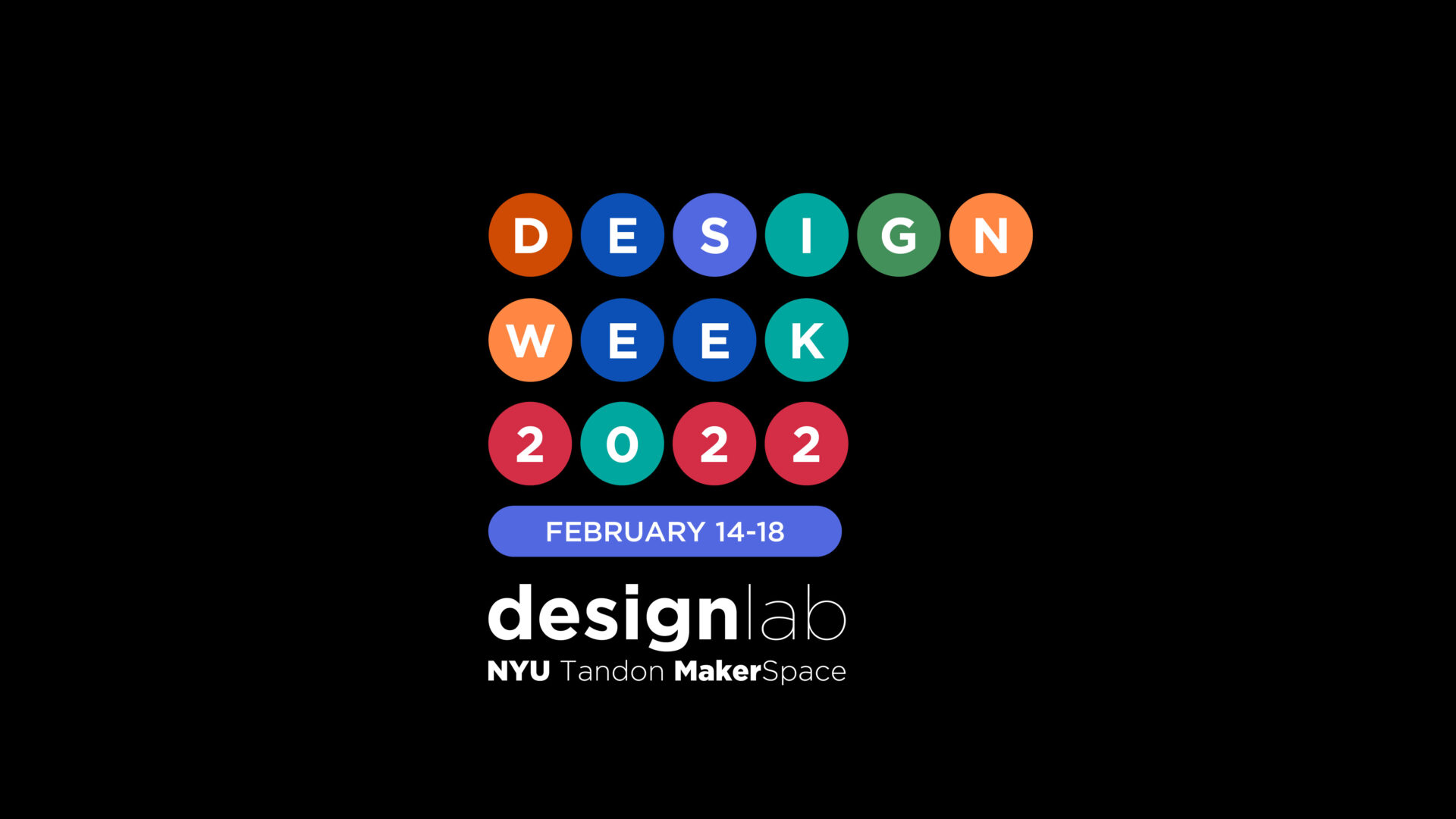 The Design Lab at the NYU MakerSpace recently held its Design Week, a week of events focused on a critical aspect of design. Design Week 2022: Designing Human-Centered Cities was all about answering the following question: how might we reimagine spaces within cities to be more equitable and inclusive? Increasing populations and densification are two of the most complex issues within cities today. As a result, engineers, architects, urban planners, and designers alike must come together to create holistic, real-life solutions across all scales and design with the future in mind. The majority of this year’s events were virtual, and the week was packed with talks, workshops, and an interactive installation.

We began Design week with our Remixing Reality: AR Workshop. Our guest host was Miriam Hillawi Abraham, Multi-Disciplinary Designer and Artist. With a background in Architecture, she works with digital media and spatial design to interrogate themes of equitable futurism and intersectionality. She holds an MFA in Interaction Design from the California College of the Arts and a BArch in Architecture from the Glasgow School of Art. She is a CCA-Mellon researcher for the Digital Now multidisciplinary project, a 2020 fellow of Gray Area’s Zachary Watson Education Fund and a Graham Foundation 2020 grantee.

Throughout the virtual workshop, we explored ways of using augmented reality to intervene in urban environments. Miriam explained that you can choose to approach your designs from a perspective of purposeful worldbuilding, from a critical angle of counter-memory, or even employ a destructive method to reimagine a new reality in place of the old. The workshop focused on constructing and deploying animated Marker-less AR filters in world space using Spark AR and Blender.

On Tuesday, the NYU community joined us in the NYU MakerSpace Design Lab to make our very own human-centered city! Participants had the opportunity to contribute to an exciting laser cut city by customizing a miniature figure that were placed around the model. The model itself featured creative elements to represent a city including skyscrapers, basketball courts, trees, phone booths, benches, and more! The installation was displayed throughout Design Week 2022 to highlight the power of community and unity as forces for change in designing more equitable and inclusive cities.

Attendees also got to view an exclusive exhibit featuring a series of preserved archives of the Downtown Brooklyn area from the 1900s. The exhibit featured historical items including images of MetroTech, housing quality maps, a newspaper article from the Polytechnic University (now NYU Tandon), and architectural drawings.

The next event of Design Week, People in Motion: Chat with Citi Bike, featured a talk from Inbar Kishoni, Community & Equity Program Manager at Lyft’s Citi Bike. Inbar Kishoni is on a mission to improve the conversations decision makers have with the people they serve, and is working on increasing access to the Citi Bike system for the City’s most-underserved populations. Included in her portfolio are programs that encourage CBOs to put on community-based bike rides, a partnership with Achilles International to provide adaptive bicycles for people with disabilities, and the Reduced Fare Bike Share program, which grants $5/month memberships to NYCHA residents, SNAP recipients, and members of select Community Development Credit Unions.

In conversation with Inbar, we asked: How do people experience cities through space and time? What does safety look like for all types of populations? Within the scope of designing cities, what does equity and inclusivity mean? Through our discussion, we learned that the answer to these questions depends entirely on who is being asked. As leaders in design, it is critical to consider multiple perspectives when we create cities, places, and products and to develop modes of participation that aren’t just inclusive, but elevate the voices of those that are most underserved.

It was an amazing opportunity for participants to hear from Inbar Kishoni. After spending more than 11 years at the NYC Department of Transportation, she now works on increasing access to the Citi Bike system for New York City’s most-underserved populations. Inbar shared both her perspective and experience within the urban planning and transportation sectors, and provided valuable insight on ways to increase mobile equity within the very city that NYU students call home!

On Thursday, we heard from Rachel Inman, UX Design Lead at Google. Rachel Inman is a NYC-based UX Design Lead at Google where she drives innovative projects across Google Maps. She’s currently leading a team of designers, prototypers, researchers, and writers in designing new search and explore experiences for Google Maps. Prior to that, she led a multidisciplinary design team in developing and launching Google Maps Live View: a first-of-its-kind augmented reality walking navigation experience.

During our Navigation: Chat with Google Maps event, attendees received a behind-the-scenes look at the design and development of the Google Maps features that aim to put people first. This included how the Google Maps team uncovered ways to help travelers as they explore unfamiliar areas, let people know where to find LGBTQ+ friendly places, and make it easier to navigate on foot in cities. This lecture covered how the team approached the design process and provided advice for others looking to design similar digital experiences for out-and-about discovery and navigation.

It was amazing to learn from Rachel herself about her experience and process as a designer for an application that plays a prominent role in the way people navigate cities around the world. Our favorite quote from Rachel during the event was, “Cities are laid out really differently. New York, Mexico City, Tokyo – all have different structures. If you are designing for people in a variety of contexts and life situations, it’s on you to become a sponge, a careful observer. It’s on you to practice empathy.”

Evolution of MetroTech: The Archives

Our final event of Design Week 2022 was the Evolution of Metrotech: The Archives workshop with Lindsay Anderberg, Interdisciplinary Science & Technology Librarian and Poly Archivist at Bern Dibner Library. As the Poly Archivist, she maintains collections regarding Tandon’s precursor institution, Brooklyn Polytechnic, from its founding in 1845 until its merger with NYU in 2014.

This workshop featured archival materials from the Poly Archives related to the planning and design of MetroTech Center (late 1980s – early 1990s). Workshop participants viewed a variety of formats including photographs, maps, architectural renderings, sites plans, and a three dimensional model. Using the archival materials as our foundation, we explored the ways in which MetroTech developed, discuss social and economic impacts, and ultimately consider how our built environment, which seems so stable, is rife with conflict, choices, history, and change. We also featured former Tandon student Joel Ureña’s (IDM ’20) senior design project, which used images from the Poly Archives to explore and share the historic legacy of black and latinx engineering students at NYU Tandon.