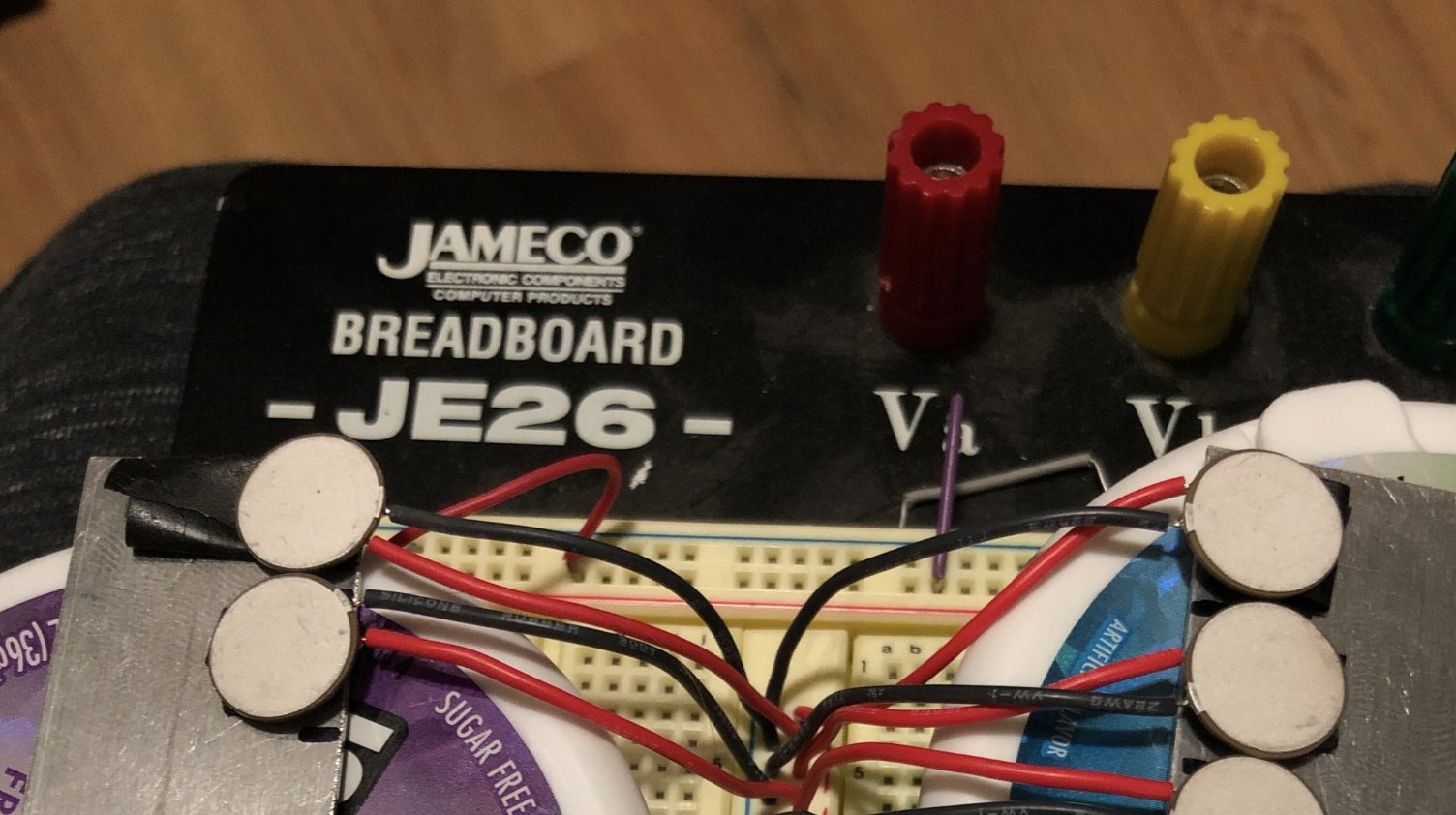 We had no idea what would happen when we received help from the Prototyping Fund, what milestones we would achieve, and what would we learn. Both of us had and still have a large learning curve considering that we are still undergraduate freshmen.

From the start, we immediately knew that our conceptual idea was simple but extremely difficult to create. We read and looked through study after study to learn about what is a piezoelectric material and what type of material is most efficient regarding electrical generation. Despite our background in robotics and computer hardware, we also had to study more about circuitry and engineering in general. We probably spent more time studying than building in Phase 1!

To say the least, working on our prototypes during Phase 2 has been rough. Every component that we’ve ordered has been plagued with delays and in some cases, cancellations. However, we’ve learned to not cry over spilled milk and continued to upgrade our prototypes.

After receiving much appreciated and much-needed funds from the Prototyping Fund, we started to work on our second prototype which made more efficient use of space within the rubber casing. Our idea was to assemble our piezoelectric disks in layered rows but this presented a problem: high resistance. When testing our generator, the oscilloscope told us that the voltage generated was high but this was left irrelevant since the resistance within the circuit was also extremely high, resulting in poor wattage.

We went back to our drawings and CADs in an attempt to create a different circuit that had a lower resistance and after successfully doing so, we ran an experiment. Using data from only our second prototype, we estimate that if around 6 square meters of Walkway generators were to be placed under the turnstiles of the Times Square – 42nd Street Subway Station, we could generate roughly around 200 kilowatt-hours per day assuming that each person steps on the Walkway generators only once. This translates to about $40-$50 saved per day in energy costs or around $10,000 annually. This also means that every day, we stop around 100-150 pounds of carbon emissions from polluting our atmosphere.

Despite our attractive data, we were still skeptical of the economics of it considering that building our generates was very expensive and Times Square Subway Station is if not the busiest then one of the busiest subway stations. We went back to the drawing board but unfortunately, this was when NYU closed its campus.

Confined to our homes, we continued to research possible new ideas that can increase our wattage output and although our ideas have been only conceptual considering ordering materials has been extremely difficult, we believe that our next prototype will increase our output considerably. Our idea was to combine moving magnets with our piezoelectric disks.

What We Learned, Covid-19, and Our Future

Even though we kept studying and making progress, our time working on our prototype with the Prototyping Fund has been a rollercoaster with extremely high highs and low lows. We would conceptualize our idea, create a CAD blueprint, and build it but often, our results were not what we expected. Problems like resistance, circuitry, and, durability would perpetually come up and highlight some mistake, regardless of how seemingly elementary it was.

Our future for the next few months has been evidently hindered by the Covid-19 outbreak and we plan to use this time to continue filling our large learning curve. As we progress, the pressure from the 300k Challange, mentors, and outside interest has gradually pushed our focus away from product development and the problem we were trying to solve. We can’t excuse ourselves from falling short of understanding our solutions and problems since climate change is the most difficult and widespread problem of this century.

Written by the Walkway Team. Reposted from https://entrepreneur.nyu.edu/blog/2020/05/04/walkwayupdates/

The MakerSpace is excited to introduce the addition of a digital badging program that will allow you to acquire new skills and display your achievements. These badges will demonstrate new skills and competencies gained from attending a series of our workshops and machine trainings. Each badge earned can be added to your LinkedIn, portfolio, or resumé to show off your understanding of leading softwares and hardware, machines and tools, the design thinking process, and much…
END_OF_DOCUMENT_TOKEN_TO_BE_REPLACED

Interested in participating in an NYU Startup Sprint? The J-Term Startup Sprint will be held virtually from January 12-22, 2021. Sprints are two-week programs that teach aspiring NYU entrepreneur teams to transform their ideas and inventions into businesses. Sprints challenge participants to deepen their understanding of their customers and build robust business models. NYU students, faculty & staff are welcome to apply.  Teams in the Sprint will experience: Expert startup coaching Daily skills-building workshops $1,000…
END_OF_DOCUMENT_TOKEN_TO_BE_REPLACED

The NYU Entrepreneurial Institute and the Design Lab @ NYU Tandon MakerSpace are pleased to announce the Fall 2020 Prototyping Fund cohort! The objectives of the Prototyping Fund are to provide student teams with the support and resources necessary to build prototypes, help articulate and/or move to the next stage of product development and encourage multidisciplinary collaboration between students at NYU. Phase I of the NYU Prototyping Fund awards teams up to $500 to be used to build and test prototypes. This…
END_OF_DOCUMENT_TOKEN_TO_BE_REPLACED

This post was written by Ariane Schoenweisner, part of the Maker-Clock and Climate Clock team, and senior studying Computer Engineering at Tandon At the beginning of Climate Week NYC on September 19, the Metronome Clock in Union Square was replaced by the Climate Clock, a countdown to the Earth warming by 1.5°C. This represents the timeline given by the United Nations Intergovernmental Panel on Climate Change before the effects of climate change become even more…
END_OF_DOCUMENT_TOKEN_TO_BE_REPLACED