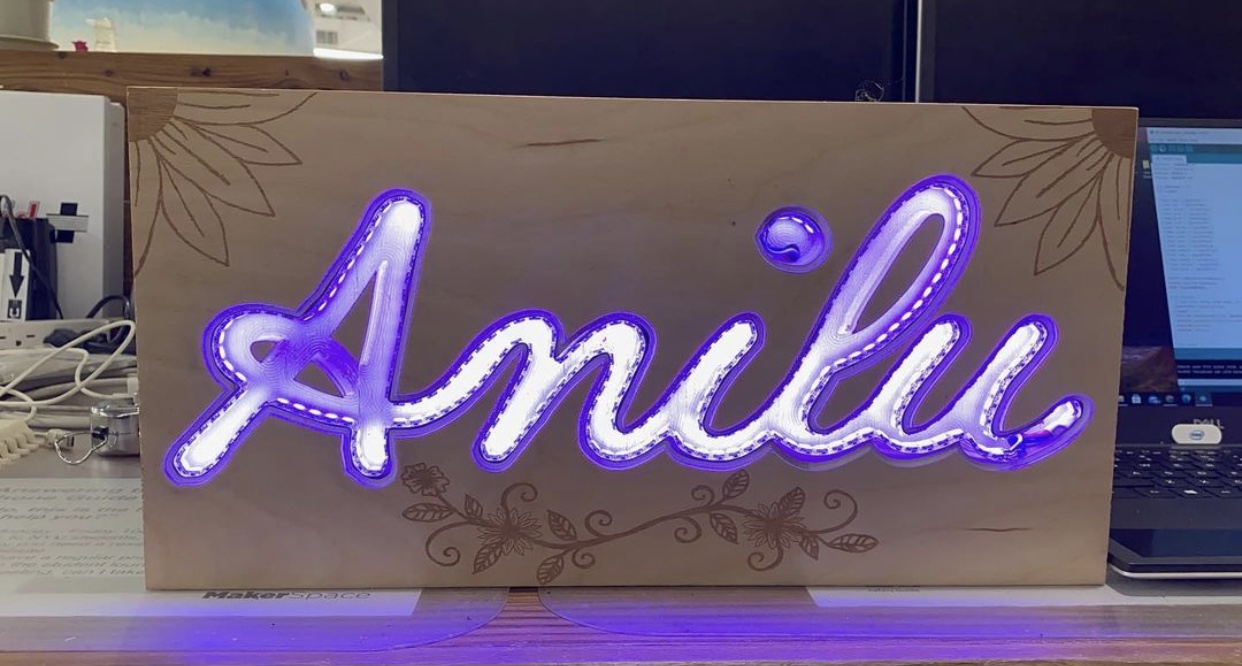 This post was written by Edward Quito, the winner of the November MakerSpace Mini Grant.

This project was a gift to my sister, who asked me to create LEDs for her room. Rather than have simple LED lights strung around her bedroom, I thought of concentrating them into a unique design instead. I also wanted to incorporate her artwork into the design, which ended up being the corner flowers. As for the placement of the LEDs, I decided to have her name light up by adding them to the back of the wood. The LEDs used for the project are addressable, meaning that each one is independent from one another. That allowed me the ability to create my own light pattern to display as her name. Since they are addressable, they also required me to code any patterns I would like the LEDs to display. This led me to have a variety of choices for my microcontroller and the different parameters such as size, how to power them, different voltage, and current rating they can provide.

I wanted to create the project using a variety of the resources that the MakerSpace provides, such as materials and machinery. I decided to engrave the design onto a block of wood and mill out her name to house the LEDs inside. To achieve smoother colors from the LEDs I also decided to diffuse them. The diffuser I used was a sheet of white transparent acrylic that was 1/8 inch thick. The used in this project wood was a 5-layer birch plywood that is ¾ inch thick

My choice for the microcontroller was an Arduino Nano. The Nano is easy to use, small, and compact so that it is not visible from the front or disturbed. The Arduino Nano also provided me with the necessary current and voltage rating for the LEDs to power them all on max brightness if wanted. Wired to it was a switch so that the entire system had an on and off switch.

The LED I chose was the BTF-LIGHTING WS2812B RGB with a voltage rating of 5 Volts. For the 160 LEDs, I  calculated the power necessary to be 30 Watts. To help control the current that flows through the pin of the microcontroller and the data wire of the LEDs, a resistor was used.

The use of an IR sensor was to allow the ability to control the LEDs pattern with a TV remote. To filter out the signal for the IR sensor, a capacitor was used. This ensured that we would get a proper signal that the microcontroller could properly read.

Firstly, the project was designed in illustrator by scanning and importing the drawing my sister made of the corner flowers. From there, I combined the quarters to create one whole flower to use in another part of the design. Once that was done, I selected a font to write her name in and thought about additional features needed to complete the layout, which led me to add the design under her name to the project. This helped create a balance between the engraving portion of the design and the rest of the components. For the engraving I used the Universal Laser cutter in the MakerSpace, which was also used to cut the acrylic piece out as well. Her name was laser cut out on the acrylic piece to function as the LED diffuser and to provide the project with a clean look flushed against the wood. For the wood, the ShopBot Desktop was used to mill out her name and house the LEDs.

The depth was measured to be exactly the width of the LEDs and acrylic. This meant that the LEDs could be placed against the side of the wood rather than the bottom of the wood. This allowed the portion that was milled out to reflect smoother light. On the wood, a border was milled out around the name as well to have the acrylic fit in without needing an adhesive to hold it in place. The acrylic was placed and held in a press-fit manner. This ensured that if any LEDs went bad or no longer worked then they could be replaced easily. The Electronics were placed by the end of her name to allow less hardware such as wires to be visible.

A drawn-up schematic of the electronics was created to view how everything was going to be placed together before assembly. With limited space, everything was put on a protoboard. The project is battery powered with a 5V 30 Watt rating to ensure there is sufficient current and voltage to power all the LEDs.

The addition of the IR sensor is to allow the user the ability to use their TV remote to change the LEDs (this is for convenience and purely optional). A similar design can be created with switches, however, there will be slight differences in the code, but nothing major.

In the future there will be a custom PCB created for the electronics. This will help lessen the space the electronics take up. I can also customize this to be a certain shape or design as well.

An enclosure for the PCB/Protoboard can be made as well. This will help protect the electronics and ensure they all stay in place.

To begin designing and prototyping your own project, please visit the MakerSpace Training and Reservations page to learn more about how you can utilize the MakerSpace. If you need advice or guidance for your project, visit the Mentoring page to reserve time with an expert!

This post was written by Edward Quito, the winner of the November MakerSpace Mini Grant. Design process This project was a gift to my sister, who asked me to create LEDs for her room. Rather than have simple LED lights strung around her bedroom, I thought of concentrating them into a unique design instead. I also wanted to incorporate her artwork into the design, which ended up being the corner flowers. As for the placement…

Since establishing the Prototyping Fund in the Spring of 2013, we have held two showcases per year, largely in person. The Spring and Fall of 2020 presented the first two opportunities to host the event in a virtual setting.  In both cases, we were impressed by the teams’ resilience and ability to keep working on their prototypes (asking questions, building to testing, collecting feedback and iterating) despite the complex context of an unusual semester. The…
END_OF_DOCUMENT_TOKEN_TO_BE_REPLACED

The MakerSpace is excited to introduce the addition of a digital badging program that will allow you to acquire new skills and display your achievements. These badges will demonstrate new skills and competencies gained from attending a series of our workshops and machine trainings. Each badge earned can be added to your LinkedIn, portfolio, or resumé to show off your understanding of leading softwares and hardware, machines and tools, the design thinking process, and much…
END_OF_DOCUMENT_TOKEN_TO_BE_REPLACED

Interested in participating in an NYU Startup Sprint? The J-Term Startup Sprint will be held virtually from January 12-22, 2021. Sprints are two-week programs that teach aspiring NYU entrepreneur teams to transform their ideas and inventions into businesses. Sprints challenge participants to deepen their understanding of their customers and build robust business models. NYU students, faculty & staff are welcome to apply.  Teams in the Sprint will experience: Expert startup coaching Daily skills-building workshops $1,000…
END_OF_DOCUMENT_TOKEN_TO_BE_REPLACED