Design Lab’s Stories #2: We Are The New Farmers 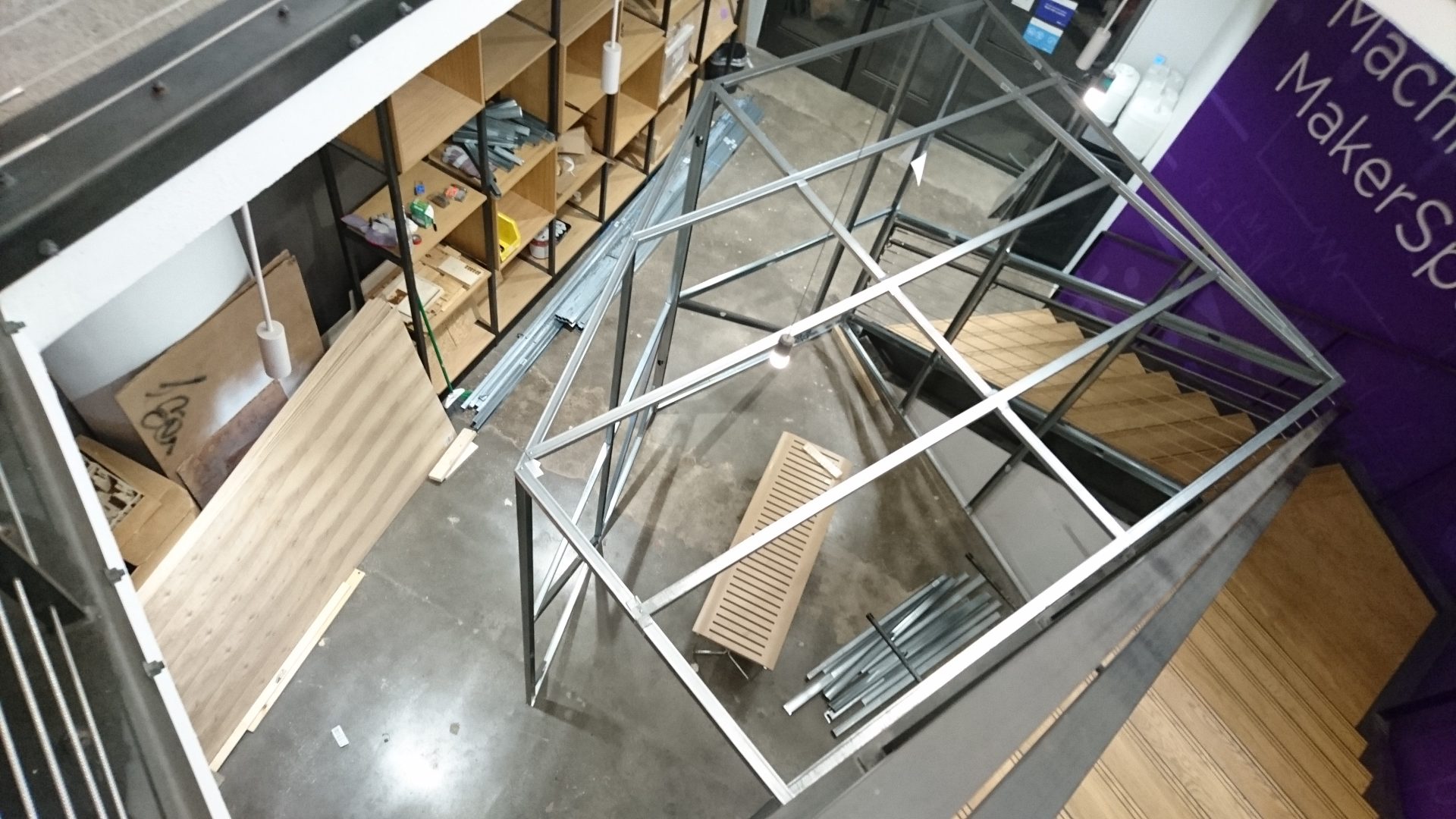 We are delighted to share with you our second Design Lab’s stories of prototyping and innovation at NYU MakerSpace – featuring the We Are the New Farmers team.

We Are the New Farmers started as a project at the MakerSpace, funded by the Prototyping Fund ((a collaboration of the Design Lab @ NYU Tandon MakerSpace and the NYU Entrepreneurial Institute) and has grown and greatly evolved since Fall 2016 when Jonas met with the first members of his team, at the time, Super Food Computer. Some of the members of the original team recently graduated and created a new venture.  (To learn more about We Are the New Farmers and spirulina, please check: (www.new-farmers.com). The urban farm they created is still in the MakerSpace and is now integrated in the Urban Lab VIP Project, led by Omar (read our Design Lab’s Story 3 to learn more about the Urban Lab).

Below you’ll read the story written by Jonas Guenther, one of the co-founders of We Are the New Farmers. We love how Jonas exemplifies all what we aim to create through the Design Lab and the MakerSpace: taking the risk to try an idea, experimenting and continuously learning and iterating, collaborating across disciplines and giving back to the community – through his efforts in creating a new model for sustainable food with We Are the New Farmers venture, but also by creating the Urban Food Lab Series to share his passion for food and sustainability with other students… Enjoy the read!

Today, We Are The New Farmers has three co-founders: Michael and me, we both graduated in May from NYU Tandon and Dan, who studied at Princeton.

Michael and I met in the Makerspace in 2017: he was part of the group of volunteers who helped setting up the farm. Dan came to one of our Urban Food Lab events (run by at the time the Greenhouse, and what is now the Design Lab). He expressed interest in our project; and a few long conversations later, he decided to quit is job and became a co-founder. 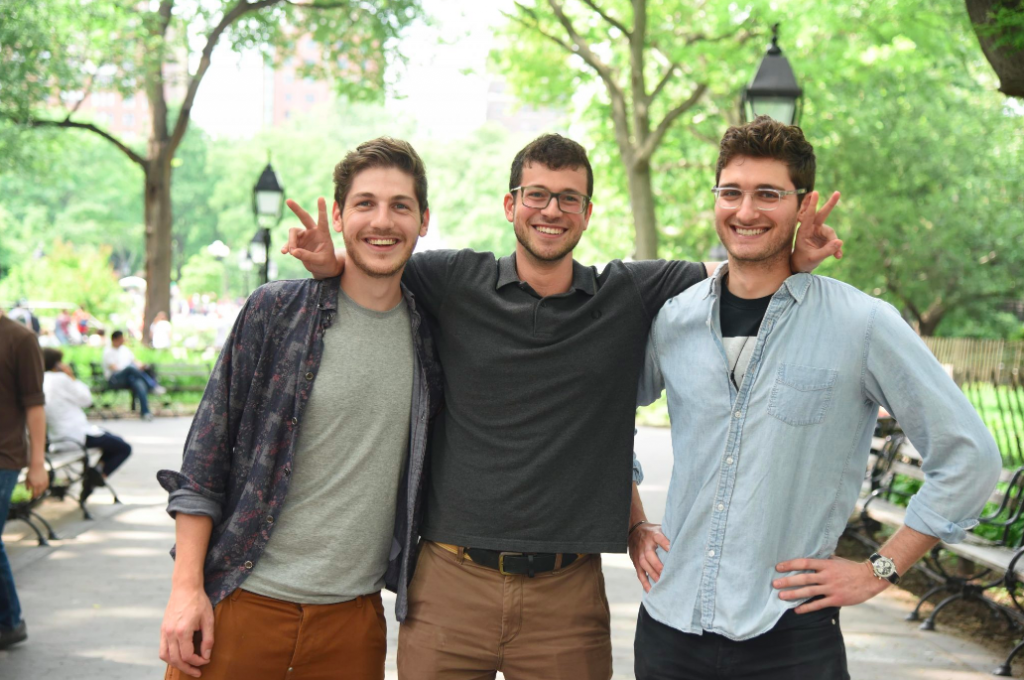 We grow the micro-algae Spirulina in our farm in Sunset Park, Brooklyn. Spirulina binds CO2 from the atmosphere and is one of the most sustainable sources of protein and among the most nutrient-dense foods on the planet. Spirulina today is mostly grown overseas and processed into a dried powder that can have a funky taste. By growing it in the city, we can offer it as a fresh paste, that tastes better and is easier to use. We want to make Spirulina a staple in our diet to increase the nutritional value of each meal and to help fight the climate crisis. 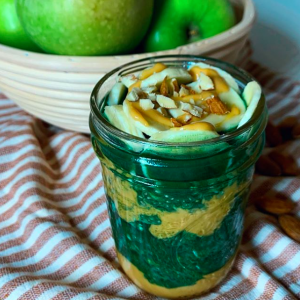 In the next 30 years 2.5 billion additional people will live on this planet and we will need to find ways to feed all those additional people. At the same time, our current food system is one of the biggest contributors to global warming, excessive pesticide use is harming the environment and the food that arrives on our plates lacks the micro-nutrients that we need. The question of how we grow our food in the future more sustainably and healthy is what drives us since day one.

Iteration and prototyping in images: 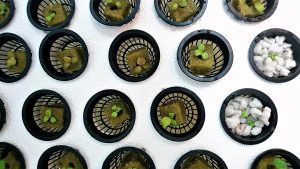 Plants in the Food Computer (Prototype #1) 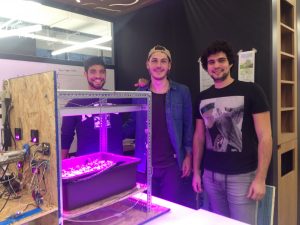 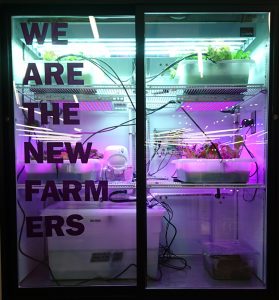 Some of the first prototypes 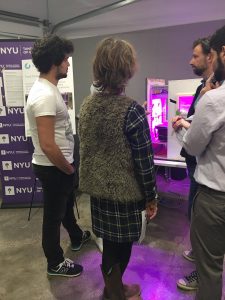 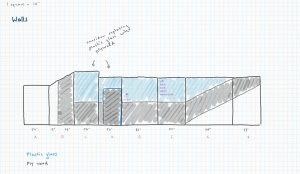 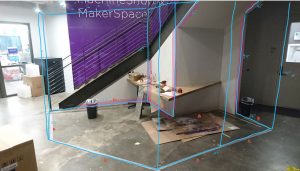 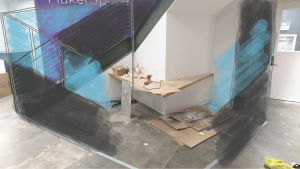 In our first year we received funding from the Prototyping Fund: we were awardees for both phase 1 and phase 2. During the first Prototyping Showcase, two of the Prototyping Fund mentors recommended us to apply to the NYU Green Grant from the Office of Sustainability. This is what we did in our second year and we were fortunate to receive the Green Grant as this allowed us to build the farm that is today in the basement of the Makerspace. We also used part of the Grant to participate in workshops and conferences to learn more about the food ecosystem and build up our network. This summer (2018) we participated in the Summer Launchpad accelerator program at the Leslie eLab. In September we moved into our very first own production space, which is a great feeling!

What role the Design Lab @ NYU MakerSpace and the MakerSpace played in your journey?

The NYU MakerSpace was the perfect launchpad for us. I remember the day the MakerSpace opened for the first time in September 2016 – I had just arrived at NYU – I was talking to Mike Knox about my idea of food production and right away, he promised to support me in whatever ways and to organize my first financial support “to get me started right away”. I met my entire team in the Makerspace, the mentors pointed out the resources that I would need, and I got the space and tools I needed to get started. 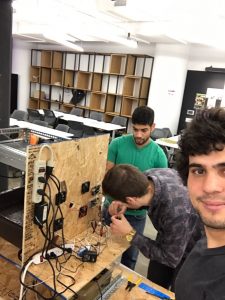 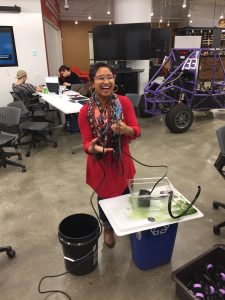 Building the farm in the MakerSpace

At the end of our first year, when we received the Green grant funding we were looking for a space to build our next version of our prototype which was much bigger than our first version. Eventually, Victoria Bill kindly accepted to host us in the basement of the MakerSpace as she had hosted the previous version. Later on, we were also encouraged by the Design Lab team to create what became the Urban Food Lab events, where we met Dan, our current co-founder.

But the most important part for me was the continuous encouragement and support of all the students in the Makerspace that kept me motivated even when things got difficult.

I could have spent hours and hours in the library researching different ways of growing food, but the reason I am know able to run a company is because I learned about growing food by building prototypes. When I look at the farm today, I do not only see the things that work but I remember all the other things that didn’t work. You don’t prototype to proof that you are right, you prototype to find the many ways you were wrong.

We just moved into our first commercial production space in the Brooklyn Army Terminal in Sunset Park and are currently busy increasing our production capacity. We want to see Spirulina on every plate and maybe someday you will be able to find our product on the supermarket shelf.

Jonas Guenther studied Management of Technology and graduated from Tandon in 2018 after spending 2 years working on We Are The New Farmers. Today he is working full-time on his startup trying to make our food healthier and more sustainable.

1 thought on “Design Lab’s Stories #2: We Are The New Farmers”

On Thursday, April 30th awardees of the NYU Prototyping Fund gathered via Zoom to share updates on their projects and showcase what they built over the semester.  The Prototyping Fund is a collaborative program offered by the Design Lab @ NYU Tandon MakerSpace and the NYU Entrepreneurial Institute that awards teams of students up to $500 in the first round of funding and up to $2,000 in a second round to be used to build prototypes  The…
END_OF_DOCUMENT_TOKEN_TO_BE_REPLACED

The InnoVention Competition is a tech startup challenge where NYU student entrepreneurs from across the globe build a team, prototype products, and pitch commercially-viable ventures to solve real-world problems. Last Wednesday, April 29th, concluded the final round of the semester-long competition where 5 finalist teams from NYU and 2 teams from NYU Abu Dhabi pitched their startup ideas through a virtual live session with over 200 participants showing up to witness the fierce competition over…
END_OF_DOCUMENT_TOKEN_TO_BE_REPLACED

Picklock (formerly Skeleton Key), an NYU startup led by Mary Georgescu (Tisch MFA ‘20) & Connor Carson (Tisch MFA ‘20), share lessons learned through their participation in the Prototyping Fund. When we began our prototyping journey in the Fall of 2019 we wanted to answer the question: How can we abstract the process of lockpicking?​ Originally we wanted a hook for our adventure game, Skeleton Key. We believed it would be thematic and exciting if we could have a…
END_OF_DOCUMENT_TOKEN_TO_BE_REPLACED

Walkway, an NYU startup led by Benjamin Zhu (CAS BA ’23) & Max Trop (Tandon BS ’23), share lessons learned through their participation in the  Prototyping Fund Phase 1 We had no idea what would happen when we received help from the Prototyping Fund, what milestones we would achieve, and what would we learn. Both of us had and still have a large learning curve considering that we are still undergraduate freshmen. From the start, we immediately…
END_OF_DOCUMENT_TOKEN_TO_BE_REPLACED